This past summer, I made the drastic decision to cut off all my hair (I’m talking like a foot of hair here). Below find the story I formally wrote for http://www.collegefashionista.com

Why Cutting My Hair Left Me Feeling More Empowered Than Ever

Do you have one trademark attribute that everyone seems to know you by? For me, it has always been my long hair—until now. Recently, I made the decision to completely change up my hairstyle, and I can honestly say that I have never felt more refreshed, inspired, and confident than I do right now. I guess what all of the bloggers and magazine editors say is actually true: A new haircut can completely change your outlook on life.

Because I’ve had long hair since I was four, it has forever been a huge part of my identity. It’s like when you’re a kid and you’re known for wearing a certain article of clothing around all the time—my hair was always pulled back with a bow, so it became a part of my known look. Back in second grade, I cut all of my hair off for the summer, and the change was so emotional that my family remembers it traumatizing me because I had only wanted a small trim and ended up with a huge change. Ever since then, the idea of cutting off my hair made me feel like I would lose a part of myself. But here I am, 10 fewer inches of hair later, and all I can think about is how delighted I am with my new appearance.

I first contemplated the idea of doing a big chop back in January right after I left home to study abroad for the semester. I very quickly pushed this idea to the back of my head because leaving New York for four months was already such a big adjustment that I didn’t want to change too much at once. While traveling, I thought extensively about whether or not I really wanted to take on this new cut, and after months of experiencing the world and deliberating, I came to the decision to do it once I was back in New York.

Originally, my hair appointment was scheduled for mid-July because I wanted to really think through this decision before I cut my hair off. I have always been someone who likes to plan ahead and really contemplate all of my options just so I have a clear and level mind. In the process of preparing, I even made a mood-board for inspiration on Instagram to show my hair stylist just to ensure that we were on the same page regarding my new look. As May concluded and the unbearably hot June days began, I thought, “Why am I waiting until mid-July to do this?” Immediately following that thought, I called up the salon and rescheduled my appointment for the following day.

On the day of my haircut, I was greeted with open arms by my stylist. She was particularly excited because in the 15 years that she’s known me, she has never cut my hair this short before. Even the “traumatizing haircut” that I mentioned earlier still left me with longer hair then a lob. I sat in the chair, pulled my hair into a loose ponytail, closed my eyes tightly, and took a big breath. As I heard the scissors cutting through my hair, thoughts of regret began entering my mind. I immediately was terrified that I wasn’t going to like it but at that point in time, there truly was no turning back. The longer it took my stylist to cut through the ponytail, the more worried and anxious I got. It felt like hours but within a couple of seconds, my hair was completely gone.

Before I opened my eyes, my stylist placed the now-detached ponytail into my hands—it was so invigorating (and quite frightening) to feel ten inches of hair gone. Reluctantly, I opened my eyes and looked straight into the mirror at my new reflection. All of the fears of regret and anxiety that I had endured were completely gone. My stylist and I shared a glance in the mirror, both of us with tears filling our eyes, overjoyed that I had finally cut it off. For the first time, she no longer saw me as the little girl that needed to sit in a booster seat in a salon chair, and neither did I. I was finally a grown woman, with dreams, aspirations, passions, and confidence to try something new. Immediately I realized that this decision meant I was ready to be an adult.

The shift from long hair to a lob taught me so much about how I look at myself. The fact that I can wake up and spend less than three minutes on my hair is a game-changer for my morning routine. I’ve also noticed that my other physical attributes stand-out more now that I have short hair, and I’m more willing to be experimental with my beauty routine. My lob has completely opened my eyes to a new, mature look, and I couldn’t be happier that I made this decision.

This new hairstyle has also completely shifted the way that I feel about myself. My hair no longer physically weighs me down; it makes me feel lighter more carefree. I feel confident and more willing to try things that scare me. The decision to cut off my favorite feature was definitely one of the most terrifying and liberating decisions I’ve made solely on my own, and the risk paid off. This new look really puts how much I’ve grown as a person into perspective for me. I am no longer a little girl; I am a strong, empowered woman, ready to take on whatever life may throw at me. 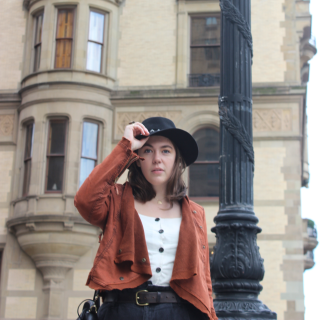 Marketing, social media, and fashion guru based in NYC

A Day in the Life